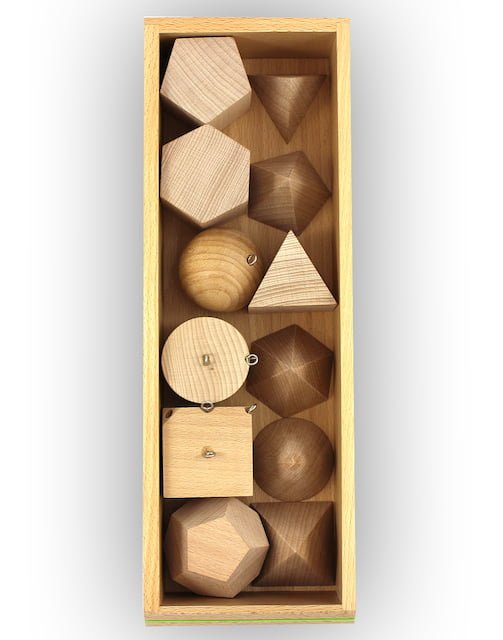 “The sequences which the child builds, as well as the sequence of the kindergarten gifts, point on the one hand to physical evolution…and on the other to the process of historic development, which magnifies the present by linking with it the past and the future.”
–Susan Blow, founder of the first kindergarten in the U.S.

All new Spielgaben 2 contains 12 geometrical figures to help children to understand the core basics of mathematical figures & shapes. As kids move the shapes around in their hands or watch them move suspended in the air, they begin to understand unique geometric principles.

Friedrich Froebel used these shapes to help teach children about the “interconnectedness” of form and material. When suspended, children can spin the shapes on different axes. By spinning a sphere, they could see some of the properties of a cube, by spinning the cube, they could begin to see the properties of a sphere, etc. The idea started with Plato who used similar toys to teach children about geometry and architecture. Frank Lloyd Wright, a famous American architect, referenced the maple blocks like those in Spielgaben 2, when discussing what influenced his design.

How to Use Spielgaben 2: 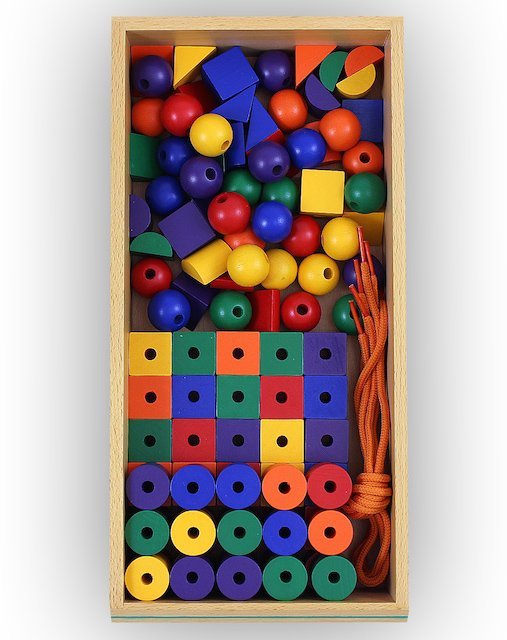 What’s Included on Spielgaben 2B:

Spielgaben 2B is a modified version of 2. It contains five different types of solids: the cube, cylinder, sphere and diagonally cut 3D figures.

Most of the solids in Spielgaben 2B have holes drilled into the middle of them. They also come in the six colors your child has experienced in Spielgaben 1. The addition of colors and holes enhances the range of possibilities that Spielgaben 2 provides.

Your child can put strings through the solids and skew them with sticks. These activities can only be performed when you use this add-on. Children will learn to identify similarities and differences among solids and categorise each item by shape or color.

Spielgaben 2B gives your child even more possibilities for building. A cylinder can be rotated like a wheel. A cylinder with a hole in it allows you to introduce the concept of the axle.