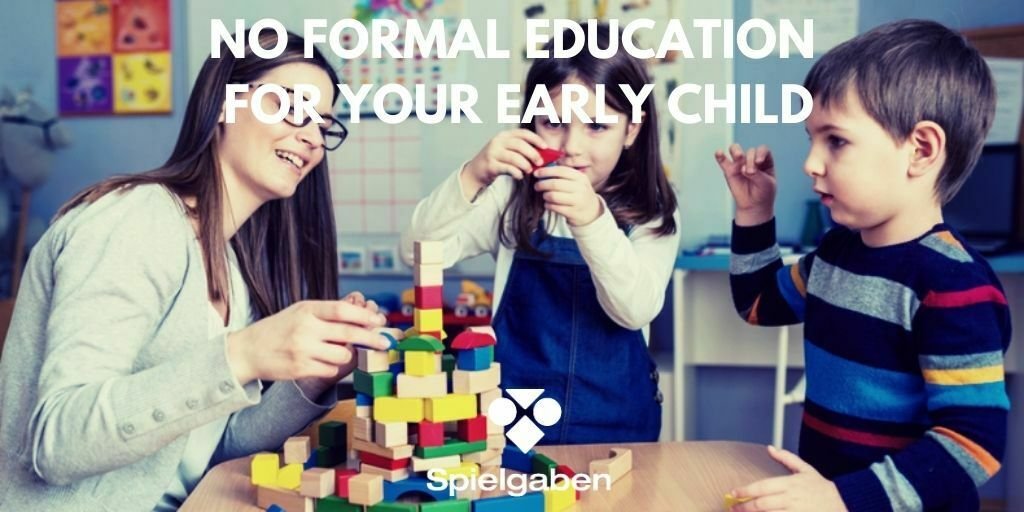 Forget about formal education for your early child

Forget about formal education for your early child

Parents naturally want to give their children the best start in life and do everything they can to ensure their intellectual development. The best thing you can do for your baby’s cognitive development, once she starts to crawl, is to childproof your home and let her explore freely while she is near you. The baby needs to move and explore.

Once your child becomes verbal and begins to ask endless questions, there is a tendency to start providing rational and scientific answers. In Miseducation, David Elkind points out that we must constantly remember that young children’s verbal skills far outpace their conceptual knowledge.

Because children’s questions sound so mature and sophisticated, we are tempted to answer them at a level of abstraction far beyond their level of comprehension.

As he points out, children are really asking about the purpose of things, not about how they work. This gives us so much more room for creativity in answering their “Why?” questions.

Coming home from the beach, a six-year-old may ask, “Why are there waves in the ocean?” Instead of explaining, we may say, “Come, let me show you,” fill the wash-basin with water and blow on it. The child will see the waves, repeat blowing on the water several times and get what is for him a more perfect answer than any explanation could furnish.

There is tremendous pressure in our society to teach reading, writing, and math to children at an increasingly early age. The pressure on American education began in 1957 with the launching of Sputnik and has continued ever since. The result is that most public school kindergartens are now doing what was once a first-grade program, while nursery-age children have taken on tasks previously reserved for older children.

The fact that reading problems have increased and test scores have failed to improve using this approach has only produced greater pressure for kindergarten teachers to pound reading and math into young heads.

Today even kindergarten teachers must use standardized curricula and make sure children can pass standardized tests that includes language, literacy, and math concepts.

In the realm of private preschools and kindergartens there has also been tremendous pressure from parents to ensure that their children are successfully taught academic subjects early.

This drive is motivated by the parents’ desire to ensure their children’s success in school and give them an edge on other children.

In the 1980s parents who were professionals in their late thirties fueled this push toward early academics by utilizing baby flash cards, classes and academically oriented preschools to help get their children into the “best” private elementary schools.

However, the damaging effect of the “super baby syndrome” was pointed out by pediatricians and by authors such as David Elkind in his book, The Hurried Child.

After years of internal debate, the early-childhood establishment has rallied against formal instruction of very young children on the grounds that it can lead to educational ‘burnout’ and a sense of failure.”

However, the rejection of early academics noted in 1987 never really took hold because of the digital revolution. Parents suddenly became worried that if their three-year-old weren’t computer literate, he or she would be locked out of success in the future. And some legislators felt that computer instruction was the tool that had been missing for teaching preschool children how to read and do math. Parents began buying software for their toddlers, and preschools were pressured to include computer instruction in their curriculum.

Questions about both the value and the misuse of computers in education have been explored in depth by developmental neuropsychologist – Jane Healy in her book, Failure to Connect.

For children in elementary school, she gives excellent guidelines for assessing and buying programs that really teach, and she also describes the importance of paying attention to factors such as how much screen time the child is putting in, the amount of glare he experiences, his postures, and so forth. Her book is a must-read for all parents and educators for this topic.

Why Not Introduce Academics Early?

Both Maria Montessori and Rudolf Steiner recognized that the young child should not be taught cognitive work directly. Montessori said that the child should be taught through the body, hence the wealth of special equipment (such as spielgaben) in a Montessori program for teaching such concepts as geometric shapes, weights, and so forth.

Steiner went even further and said that concepts shouldn’t be taught at all to children before the change of teeth. He placed the emphasis on creative play, imagination, imitation, movement games and finger plays, crafts, and artistic activities until the physical body is more developed and the energy needed for its intense early growth is freed for forming mental pictures and memory work.

In noting the tremendous changes that occur naturally around the age of seven, Steiner gave indications of the problems that could arise by introducing early cognitive learning to children. Although it is possible to speed up development in certain areas with some children, tampering with nature’s timetable can result in negative effects in other areas.

Attention to this factor in development during the early years can form the foundation for health and vitality throughout life. Obviously the child is learning a tremendous amount and developing cognitively during these years. Steiner simply means that parents should not address the intellect directly but instead encourage the child’s learning through direct life and playful learning experiences.   He explains:

In the human embryo the eyes are protected and the external physical sunlight must not work upon their development. In the same sense external education must not endeavor to affect a graining or influence the moulding of the memory, before the change of teeth. If we, however, simply give it nourishment and do not try as yet to develop it by external measure, we shall see how the memory unfolds in this period, freely and of its own accord.

Some children can be taught to read prior to kindergarten, and even some babies can be conditioned to recognize flash cards. But based upon her research on brain development, Jane Healy reminds us that reading and writing are built on language ability – the power to listen carefully, understand what others are saying, and express ideas effectively. In Your Child’s Growing Mind, she concludes;

Even babies can be conditioned to associate two stimuli that are presented repeatedly, but this learning lacks real meaning for the child and may use inappropriate parts of the cortex instead of those best suited for the job. In fact, forced learning of any type may result in the use of lower systems since the higher ones, which should do the work, have not yet developed. The “habit” of using inferior brain areas for higher-level tasks (such as reading) and of receiving instruction rather than creating patterns of meaning causes big trouble later on.

….. Yes, even babies can be trained to recognize words. Babies, however, cannot read, tapping into a vast personal storehouse of language and knowledge that takes years to build. Most preschoolers, likewise, can be trained to do almost anything, if the task is simplified enough and one is willing to devote the necessary time and energy. Yet the brain power- and possibly the neural connections-are stolen from the foundation of real intelligence. Reading becomes a low-level skill, and there is a danger that it will remain at the level where it was learned and practiced.

Healy points out that truly gifted early readers are insatiable in their desire to learn to read. They don’t have to be taught, and they make instinctive connections with thought and language. These children usually learn without lessons from adults or older siblings. Other children, she says, can experience reading problems that are “created by forced early instruction.

Many authorities believe that age seven is the right time to begin formally teaching reading. Studies in different countries have shown that when five-and seven-year-olds are taught by the same methods, the seven-year-olds learn far more quickly and happily than do the fives, who are more likely to develop reading difficulties.”

Jean Piaget, Steiner, and others have pointed out that children go through various stages in their development and thinking. The latest brain research has actually shown that the brain goes through a developmental and differentiating process.

Healy, based upon her extensive research in brain development, has concluded “the immature human brain neither needs nor profits from attempts to ‘jumpstart’ it. The fact that the phrase is being successfully used to sell technology [educational software] for toddlers illustrates our ignorance of early childhood development.”

In addition to causing children to skip developmental stages or utilize lower levels of the brain to accomplish learning tasks, early academics can take an emotional toll as well.

According to Healy, “Studies show that four-,five-,and six-year-olds in heavily ‘academic’ classes tend to become less creative and more anxious-without gaining significant advantages over their peers.

Youngsters in well-structured ‘play’ oriented schools develop more positive attitudes toward learning along with better ultimate skill development.” Another study of young children looked at creativity along with academic gains. It showed significant reductions in creativity after even moderate use of a popular reading software system.

In short, forget about educational software for your little ones and spend more time playing and learning through playful nature and let your child explore surroundings. It will do far more benefit than forceful education that will eventually do more harm than good.

Further Reference: You are your child’s first teacher By Rahima Baldwin Dancy, 2000