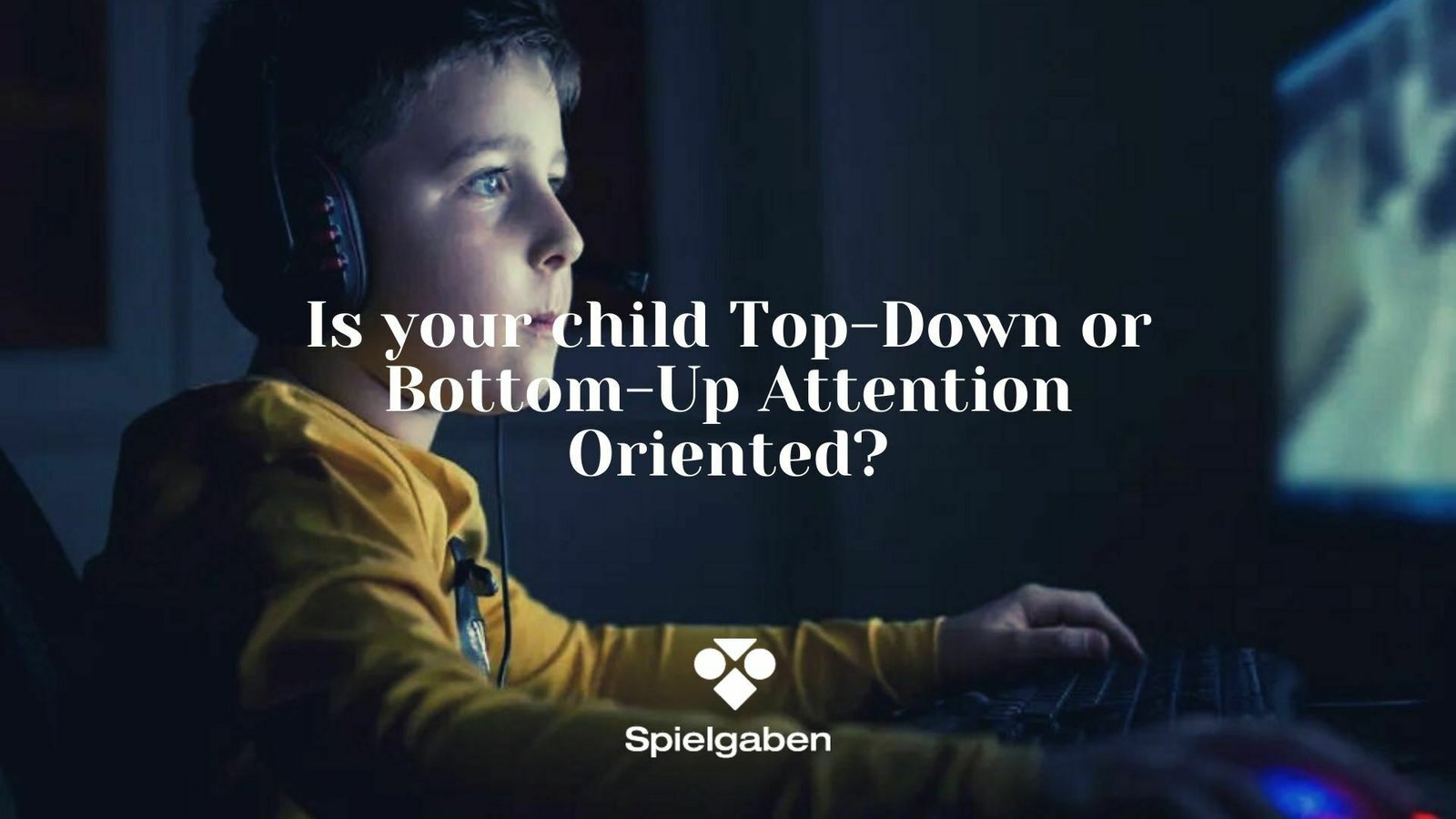 Is your Child Top-Down or Bottom-Up Attention Oriented?

Is your Child Top-Down or Bottom-Up Attention Oriented?

We as young parents are enough to be distracted frequently by email or the Web when we are trying to work, but are old enough that our brains didn’t develop under those conditions.

In contrast, many of today’s children are growing up with continuous access to electronic media, from the TV in the bedroom to video games on the road.

In the U.S., the average baby starts watching TV at five months of age, before he can sit up by himself.  By seventh grade, 82 percent of children are online.

Your child’s brain is wired to seek out and pay attention to new information because our ancestors’ survival often depended on detecting changes in the environment-from the arrival of a lion to the new expression on a mate’s face.

But what happens to our brains when getting new information becomes too easy?

Our society seems to be in the process of finding out, as the Internet brings an avalanche of facts and ideas into our lives.

Researchers do not yet know the full effects of exposing children to a constant stream of highly salient stimuli, as the new media environment is a recent occurrence. Let’s start with some basic conceptual principles, established by decades of neuroscience research.

Many neuroscientists emphasized that a child’s brain depends on commonly available sensory experiences to help determine which neural connections should be maintained or lost. If the character of these experiences changes dramatically, we would expect to see effects on brain development.

In the case of new media, the few experiments that have been done support this idea, and it was found that the effects of media experience on the brain depend on the details – whether your child is passively watching TV or actively playing video games, at what age the experience occurs, as well as which activities your child is neglecting in order to find time for it all.

At any given moment in everyday life, deciding which information should have your attention is far from simple. Your brain needs to combine the ability to concentrate deeply on a particular problem with the ability to reorient itself quickly if important changes happen.

To achieve this balance, top-down attention, the deliberate direction of your brain’s focus by the cortex, must compete with bottom-up attention, the automatic capture of your brain’s focus by salient events, such as someone screaming- or the buzz of your cell phone reporting an incoming text message. You’ve probably experienced moments when one system dominated the other; either your concentration was so deep that you didn’t hear your baby cry, or you were getting interrupted so often that you couldn’t make any progress on your work assignment.

The bottom-up system is functional at birth, earlier than the top-down system, which can take control for brief periods by the end of the first year and continues to improve at least to age ten and perhaps into adolescence. This discrepancy in the maturity of the two systems is why younger children are easier to distract than old children. The ability to use executive function is a key ingredient of self-control and improves with practice.

A basic principle of neuroscience is that brains become better at doing whatever they do frequently.

Another recent change in children’s sensory experiences is the rise of multitasking. In the U.S., children now fit 8.5 hours of media use into 6.5 hours per day, on average, by doing multiple things at once (text messaging while watching TV or listening to music while playing video games). Almost all of us believe that we can multitask.

However, the brain cannot concentrate well on more than one thing at a time. A major source of interference between tasks seems to be the limited capacity of the prefrontal cortex, a key aspect of the brain’s executive control system.

Many aspects of brain function, such as walking or driving a familiar route, do not require direct conscious control. Planning your actions, though, does require attention, as you will notice the next time you get distracted and end up at a familiar destination when you meant to go somewhere else.

People who claim to do multiple attention-demanding tasks at once are actually switching between the tasks repeatedly. Every transfer of attention from one task to another requires resources, as your brain must remember or reconstruct where you were on the abandoned task when you come back to it. The first task can also interfere with the representation of the second task in your memory. For these reasons, switching back and forth between tasks takes more time than completing the same tasks one by one in sequence.

What cognitive psychologists call the cost of switching reduces performance on individual tasks. If both tasks are highly practiced, this switching cost can be reduced or perhaps in rare cases eliminated.
Under no circumstances, though, is it more efficient to do multiple attention-demanding tasks at once than to do them separately.

In short, multitasking is a myth.

The cost of chronic multitasking may include diminished performance when single-tasking. One study found that college students who multitask more often performed worse than those who multitask less often at tests of distractibility and task-switching ability. Students who spent more hours using the Internet also tended to spend more time using multiple types of media simultaneously.

The performance of high multitaskers was more severely impaired by distractors, compared to low multitaskers, though the two groups performed equally well when no distractors were present. In other tasks, high multitaskers also had more trouble ignoring irrelevant items in their memory and switching back and forth between two sets of rules.

If your children spend a lot of time multitasking, it is most likely not to be good news or their ability to concentrate.

Your children’s life experiences influence their brains in a variety of ways. Because the rise of electronic media is both so recent and so significant, many parents and even child educators not so sure how to handle these sudden changes and how it would affect their child’s development & well-being.

One thing certain though is that young children’s brains are strongly influenced by one-on-one interactions with caring adults, which cannot be replaced by anything that appears on a video screen.

Before age three, electronic entertainment has no benefit and clear costs. It would be much better spending time on physical play or hands on learning. For older preschoolers, educational TV can be beneficial while a lot of programs are more like to do harm than good. In school-age children, electronic media are a mixed blessings, improving some cognitive capacities, while perhaps impairing others.

There are strategies you can use to reduce the negative impacts and help your child to develop more top-down attention which is critical for learning success at school.

Providing time for other activities by limiting screen time is likely to be beneficial for development.

There is no doubt that childhood experiences influence brain development, so it’s worth making sure that the important ones are available to your child.

Children need exercise, they need face-to-face interaction, and they need to spend time outdoors. In that light, our parents’ suggestion to “Go outside and play” is backed not only by common sense but by modern brain research.

After all, sunflowers need to see the sun every so often to blossom.