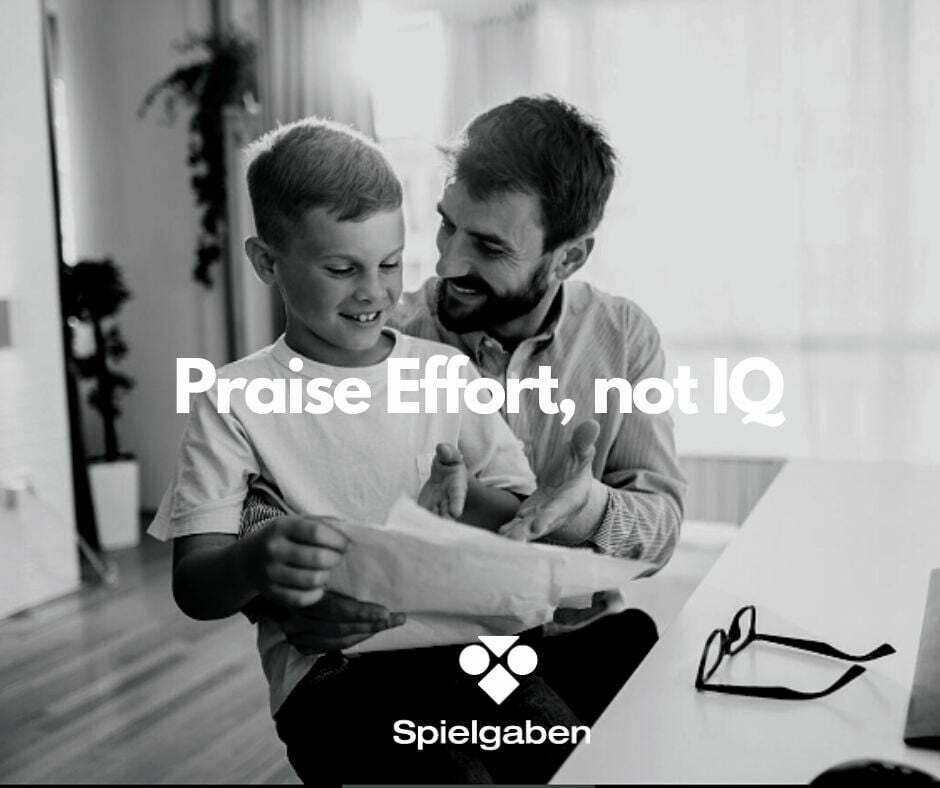 By SpielgabenJanuary 7, 2023Parenting Tips
No Comments

We know achievement comes from strong effort, not necessarily from high IQ.

As many parents understand, a child with naturally high intelligence is not automatically guaranteed a spot on Harvard or Yale University.

It will not even guarantee him or her an A on a math test.

What separates high performers from low performers is not some given intelligence. It is, the most recent findings suggest, a much more boring – but ultimately more controllable – factor. All other things being equal, it is effort and Good old-fashioned deliberate practice.

The effort is the willingness to focus one’s attention and then sustain that focus. Effort also involves impulse control and a persistence of delaying gratification.

How can you get that kind of effort from your child? Surprisingly, it is quite simple. It depends on how you praise your child.

What you praise defines what your child perceives success to be. Here is where parents make a common mistake.

Steve’s parents constantly told him how smart he is. “You are so intelligent! You can do anything, Steve. We are so proud of you.”

They would say every time he did a Math, English, or any test. With the best of intentions, they consistently bind Steve’s accomplishment to his intellectual prowess.

Researchers call this “Fixed Mindsets.” The parents had no idea that this form of praise was harmful to their children.

Little Steve quickly perceives that any academic achievement that required little to no effort was the behavior that defined his talent.

When he enters high school, he run in to subjects that requires a great deal of efforts. For the first time, he starts making mistakes and does not see these mistakes as opportunities for improvement.

Okay, What Steve’s parents should have done? Research suggests a quite simple solution.

Rather than praising him for being smart, they should have praised him for working hard. On the successful completion of a test, they should not have said, “I am so proud of you. You are such a smart kid.” That appeals to a fixed, uncontrollable intellectual trait. It’s called “Fixed Mindset” praise.

His parents should have said instead, “I’m so proud of you. You must have studied hard.” This leads to controllable effort. It is called “Growth Mindset” praise.

Children with a growth mindset tend to have a positive attitude toward failure. Rather than seeing mistakes as failures, they see mistakes simply as problems to be solved. ‘’

If you are already gone down the path of fixed-mindset praise, is it too late to switch? Research has shown that even limited exposure to growth-mindset praise has positive effects.

So do not despair if you have been fixed mind set praise. It is not too late and you can start today and help your child develop growth mindset.