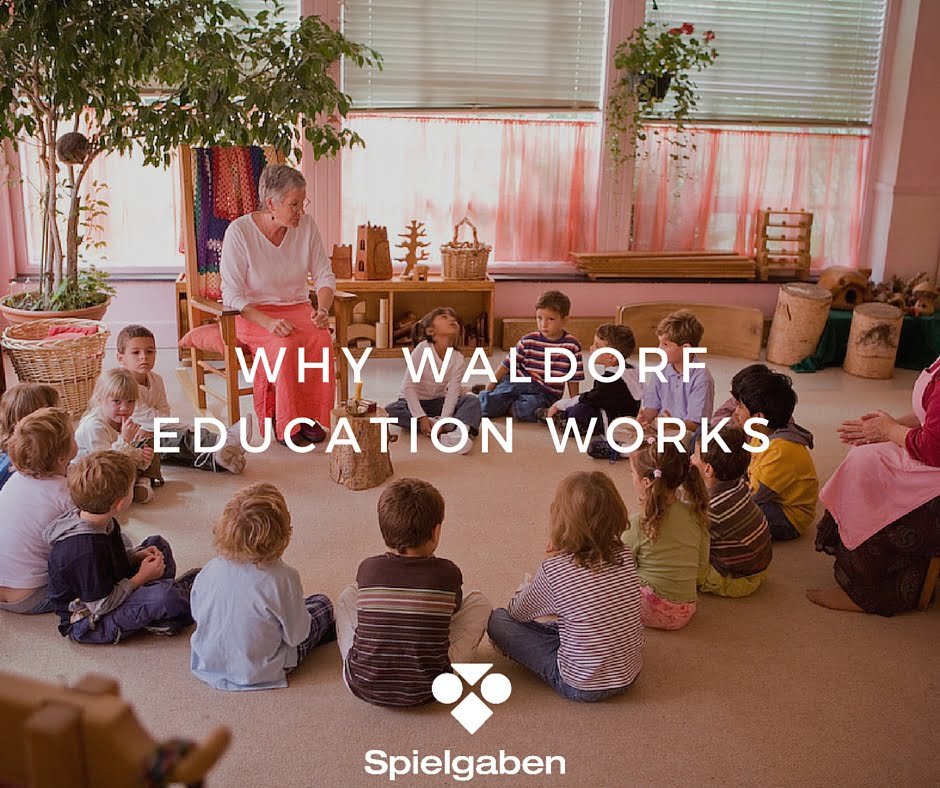 If you walk into a Waldorf classroom it’s highly likely that you’ll see lots of arts and crafts materials for all sorts of different projects that they do. This is because Waldorf schools emphasise creativity and hands-on learning. They could be producing their own plays, riding around on unicycles, or even playing a recorder. The learning opportunities are endless. Here we take a look at why Waldorf education works for children, even though it has had its fair share of criticism.

Is In the Beginning – Waldorf Schools were a Radical Educational Model

When Austrian philosopher Rudolf Steiner developed the first Waldorf School for the children of cigarette factory workers in 1919, Europe was rebuilding after World War I and was ready to embrace a new type of educational model, one that was radically different for its day. Today, the model remains unique when compared with traditional schools.

Rudolf Steiner believed all humans had the ability for self-improvement, spiritual growth, and the potential to change the world around them. Bearing that in mind, Waldorf schools are based on the philosophy that imaginative and practical, hands-on work is the best way to promote learning. Children are introduced to lessons through music, visual arts, dance, writing, and myth. Even classical mythology, cultural folk, fairy tales, and religious images — from the Buddha to angels — are common in Waldorf classrooms.

They certainly don’t take a traditional approach at all. Instead of teaching specific skills such as reading, Waldorf encourages students to paint or draw letters until they learn to recognise and write them. The Waldorf approach to reading is substantially different from how it’s taught in mainstream schools. In fact, students don’t focus on traditional forms of reading until third grade. Instead, they spend time listening to stories and recognising sounds in the early grades.

Through creative arts, such as knitting and woodworking, students also learn basic mathematical skills of counting, geometry, and fractions. They learn about science, zoology, and biology by crafting animals and dolls out of pine cones, rocks, and other materials they find outside. Outdoor classes are not only offered at some Waldorf schools, students are encouraged to get muddy and play in the rain.

In later grades, students also learn through storytelling, hands-on art projects, and textbooks they write and illustrate themselves. Some schools may bring in textbooks for math and foreign languages, though. Classrooms are absolutely technology free.

In many instances, children really learn some phenomenal skills from this approach and this is why Waldorf education works so well.

Is a Waldorf school a good fit for your family?

Many parents who visit a Waldorf school for the first time fall in love with Waldorf’s unique approach – the old-fashioned pace, an abundance of arts and crafts, no technology, plenty of outdoor education, and an emphasis on hands-on learning. Instead of whiteboards up on the walls, you’ll find old-fashioned chalkboards. Kids learn about history and mythology through the images and objects that they create themselves. If your child is creative, there are lots of opportunities to paint, knit, or sew. Music is also core to the curriculum; you’ll find musical instruments in nearly every classroom. They also put an emphasis on children writing and acting in their own plays.

However, some parents on the other hand could be looking for a technology-driven classroom that prepares children for a fast-paced world and if this is the case then Waldorf may not be for you. When you sign your child up for Waldorf schooling there are strict media policies that you have to sign up for including limiting your child’s access to TV, computers, iPods, iPads, video games and pretty much any other electronic device that you can think of that might distract your child.

At the same time, a Waldorf school may not be for you if you’re more comfortable with a traditional approach to reading, writing, and maths. It could also not be the right fit if you worry that your child will fall behind if she doesn’t learn the basics in her first few years at school.

What will you Find in the Waldorf Classroom

You’ll find paintings, pastels, pen and ink sketches — you name it. Students’ finished artwork lines the walls of the schools, not to mention individual student notebooks.

There are no computers, iPods or iPads, videos, pocket calculators, or CDs in the early grades. Limited use of technology is allowed in high school.

3) No grades or standardised tests in the early grades

In fact, at many Waldorf schools, students are not introduced to standardised testing until the eighth grade.

4) Journals of daily lessons instead of textbooks

Students hand-write lessons from their teachers each day. These journals contain artwork, maths problems, and history lessons all written and drawn by hand.

5) The same teacher for years

The Waldorf tradition of “looping” means a teacher stays with the same class for up to eight years. The goal is to promote bonding between students and teachers.

6) Storytelling, cooking, and gardening in the younger grades

It’s common to find cooking utensils, including knives and chopping boards, and a bubbling pot of soup in the classroom.

7) A lesson or two outdoors

Students learn about science by using their senses and curiosity to interact with and observe plants, animals, and other things they may find outside.

8) Classrooms without walls, sometimes without furniture

Waldorf education has been adapted to home schooling programmes and community programmes without physical schools. In some classrooms, particularly kindergarten, children have no desks.

These advocates argue that without TV or computers, children build a habit of reading and writing in their free time. Research studies support the claim that writing by hand encourages adults to recognise written letters more quickly than they would if they had typed them.

Children are treated as individuals and the curriculum is tailored to their unique style of learning.

Students are discouraged from competing and are free to learn at their own pace.

Children learn the meaning of teamwork and community.

Working on group art and theatre projects helps them learn collaboration at an early age.

Waiting until the later grades to teach reading and math promotes long-term achievement.

Because brain development occurs at a different pace for each child, the Waldorf approach helps students thrive until their learning skills catch up with their development. What’s more, reading and maths is approached differently than in traditional schools. Numbers, maths symbols, and letters are introduced in first grade through stories so they are less abstract for children.

Finally, what does the Research Say?

A 2012 study of Waldorf pupils in Germany concluded that, in comparison to state school pupils, Waldorf students are significantly more enthusiastic about learning, report having more fun and being less bored in school, more often feel individually met, and learn more from school about their personal academic strengths. 85% of the Waldorf students reported that their school environment was pleasant and supportive, compared to 60% of the state school students. More than twice as many Waldorf students report having good relationships with teachers. Waldorf pupils also have significantly less physical ailments such as headaches, stomach aches, or disrupted sleep. There was no statistically significant difference between the state and Waldorf pupils’ achievement on state examinations this is also true when test scores are compared based on the type of high school diploma granted.

A 2006 PISA study of Austrian students found that Austrian Waldorf students are above average in science. The Waldorf students did best in understanding the questions raised by science and the ability to solve scientific problems and were also above the OECD average for their joy and interest in science. The authors concluded “The relatively high expertise in science among Waldorf students, in combination with their very high motivation and interest in these subjects, as well as the various pedagogical principles, suggest that regular schools can learn from the Waldorf schools, particularly with regard to concrete application to the sciences.”

A major quantitative and qualitative study of senior secondary students in the three largest Steiner schools in Australia was undertaken by Jennifer Gidley in the mid-1990s. It investigated the Steiner-educated students’ views and visions of the future, replicating a major study with a large cross-section of mainstream and other private school students undertaken a few years prior. The findings as summarised below contrasted markedly in some areas with the research from mainstream students at the time.

In 2008, the Rudolf Steiner Schools Association of Australia funded a research project to investigate the relationships between Steiner education and related 21st century academic education. The report on the project is called “Turning Tides: Creating Dialogue between Rudolf Steiner and 21st Century Academic Discourses”.

A study comparing the drawing ability of children in Steiner/Waldorf, Montessori and traditional schools concluded that “the approach to art education in Steiner schools is conducive not only to more highly rated imaginative drawings in terms of general drawing ability and use of colour but also to more accurate and detailed observational drawings,” while another study found that Waldorf pupils average higher scores on the Torrance Test of Creative Thinking Ability than state-school students.

An American study found that Waldorf-educated students scored significantly higher on a test of moral reasoning than students in public high schools and students in a religiously affiliated high school. Waldorf students were also far more likely to volunteer opinions about the survey and research in general, suggesting possible improvements in the survey technique and offering alternative ways of resolving the moral dilemmas that rose in the survey.

A 1995 survey of U.S. Waldorf schools found that parents overall experienced the Waldorf schools as achieving their major aims for students, and described the education as one that “integrates the aesthetic, spiritual and interpersonal development of the child with rigorous intellectual development”, preserving students’ enthusiasm for learning so that they develop a better sense of self-confidence and self-direction.

The students overall were positive about the school and its differences; experienced the school as a “community of friends”; and spoke of the opportunity to grow and develop through the broad range of activities offered, to learn when they were ready to learn, to develop imagination, and to come to understand the world as well as oneself. Many students spoke of the kindness of their peers and of learning to think things through clearly for themselves, not to jump to conclusions, and to remain positive in the face of problems and independent of pressure from others to think as they do. Improvements the students suggested included more after-school sports programmes, more physical education classes, more preparation for standardised testing, a class in world politics and computer classes. Faculty, parents and students were united in expressing a desire to improve the diversity of the student body, especially by increasing representation of minority groups such as African-Americans and Hispanic Americans.

Waldorf students are less exposed to standardised testing; such tests are generally absent in the elementary school years. Despite this, U.S. Waldorf pupils’ SAT scores have usually come above the national average, especially on verbal measures. Studies comparing students’ performance on college-entrance examinations in Germany found that as a group, Waldorf graduates passed the exam at double to triple the rate of students graduating from the state education system, and that students who had attended Waldorf schools for their entire education passed at a much higher rate (40% vs. 26%) than those who only had part of their education at a Waldorf school. Educational successes of private Waldorf schools may partially reflect the social status of their students.