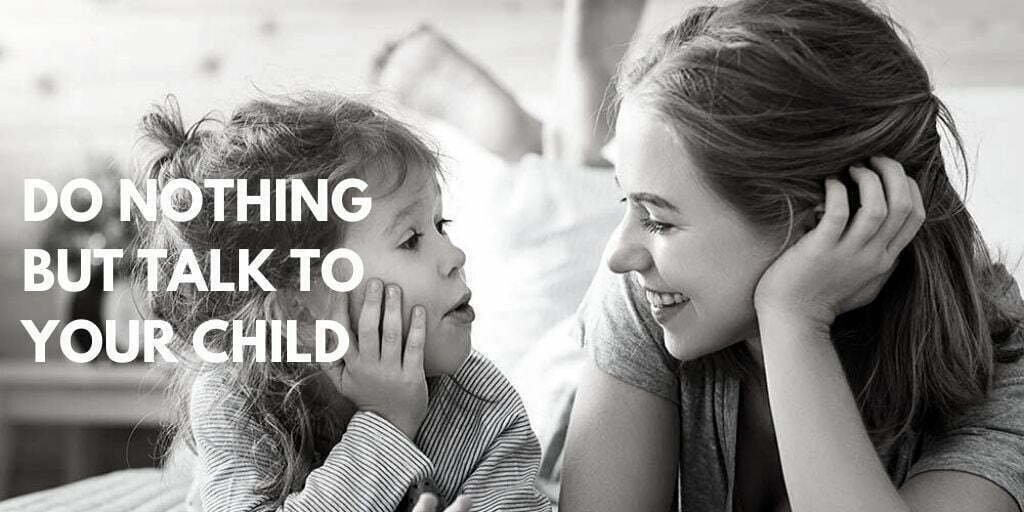 Do Nothing But Talk to Your Child

Do Nothing But Talk to Your Child

We hope you have been talking to your baby since her birth as if she were a person worthy of respect.

One of the best things you can do for your child is to talk to her. Talk to her while you are changing her diaper or giving her a bath. She will usually appreciate the attention and, as a knowing being, will appreciate being treated as a person rather than as an object. And you will be helping not only her language development but her brain development as well.

This attention and respect not only increase her sense of self-worth and her living interaction with you, but also by using proper language rather than baby talk, you are providing a model worthy of imitation.

There are approximately six thousand languages in the world, and your newborn is equally fluent in all of them! But she quickly learns to distinguish between phonemes through staying attuned to whatever sounds the speakers around her are using. By twelve months, an infant’s “Auditory map” in the brain will have been formed. She will be unable to pick up phonemes that she has not heard thousands of times because no clusters of neurons will have been assigned the job of responding to that sound.

The next step in decoding speech, after recognizing phonemes, is to start recognizing words from the run-together stream of sounds that we register when we hear a language that is foreign to us. Early on babies start to become accustomed to how sounds are used to start syllables in their mother tongue.

Once children start to recognize and play with syllables, they become attuned to metric patterns as well. Peter Jusczyk, a cognitive scientist at Johns Hopkins University, showed that between six and ten months, American babies develop a clear bias for words with first-syllable accents. (The majority of English words, and virtually all the Daddy-baby-birdie diminutives we use with babies, are accented on the first syllable. French words, by contrast, typically have the accent on the last syllable.)

The first unmistakable signs of word recognition usually occur around eight months of age. If someone says, “Where’s Mommy?” while several people are in the room, a child will turn toward her mother when she really knows that word. That depends, of course, on the mother having referred to herself as “Mommy” or “Mama.”  If all the child ever hears is her father referring to her mother as “Gemma,” she will also call her mother by her first name. There is something to be said for having your child refer to the two of you as “Mommy and Daddy,” “Mama and Papa,” or some such words because the sounds of these words are appropriate and easy to learn, and because it expresses relationship (parent and child, family).

And please sing to your child, beginning when you are pregnant and continuing throughout childhood! The melodic quality of language and the emotions expressed through a lullaby or a nursery game are very valuable for your baby’s development. Comprehension is not the only part of language, although it tends to be overemphasized by our intellectual adult nature. Nonsense rhymes and action verses such as “To market, to market” become favorites of the toddler and teach the melodic quality of language. This kind of interaction is not only valuable for the developing child, but it can also make parenting tasks go more smoothly.

As your child comes to understand specific words, she will begin following simple instructions, like waving bye-bye or sitting down. Once your child starts to walk, she will frequently be coming to show you things or ask for assistance. Such times, when her attention is clearly directed toward you, are excellent times to talk about what is at hand and then to act on it.

Many parents underestimate what their child can understand at this age. This does not mean that you should explain everything to one year old! It does mean that you should talk intelligently about what is happening in the present – what the child is seeing and doing. Between the first and third birthdays, language comprehension explodes to the point where most children understand most of the words they will use in ordinary conversation for the rest of their lives!

Okay, so when my child can start talk?

The ability to produce language proceeds much more slowly than the ability to understand it. While your child will show increasing understanding of words before her first birthday, very few children speak before they are one.

The reason for this is that language development grows out of movement and the ability to walk. Modern neuro-linguistic work supports the relationship between learning to walk and grasp, and learning to speak.

A child’s vocabulary increases slowly at first, from an average of three words at twelve months to twenty-two words at eighteen months of age. But around a year and a half, children’s language abilities explode, so that most start acquiring new words at the phenomenal rate of one every two hours.

By their second birthdays, most children have mastered one thousand to two thousand words and have started stringing two words together. How much languages is in the child’s environment makes a huge difference in how much vocabulary she acquires:

Studies have shown that the size of a toddler’s vocabulary and the complexity of her sentences are strongly correlated with how much a mother talks to the child; however, only “live” language, not television, produces these vocabulary and syntax-boosting effects. Why doesn’t all the gabbing on TV stimulate language development? Researchers suspect that “language has to be used in relation to ongoing events, or it’s just noise.”

In other words, language needs to come from a living source and be related to events, emotional contexts, and cause-and-effect relationships in a child’s life in order for the synapses to register in meaningful ways that the child will remember. So much for educational TV and pre-schooler’s language development!